Many times when people walk into CFS, they are often at one of the lowest points in their lives. It was no different for 41-year-old Rhonda*. When she first visited the CFS Hilo Family Center in May 2015, with her then 6-month-old son, she was the victim of domestic abuse, unemployed and homeless, sleeping in her van in a church parking lot.

Heartbreaking as Rhonda’s situation was, Leenette Kealoha, CFS Hilo Domestic Violence Advocacy Program Supervisor says it was not unique. What was noteworthy about Rhonda, says Leenette was her positive attitude. “I could tell that there was more to her. She had this sense of optimism,” she says.

Within the first month of working with CFS, Rhonda made quick strides toward a fresh start. “She was very proactive. She was aggressive and adamant about getting herself back on track,” says Leenette. Rhonda contacted partner agencies Leenette connected her with, attended weekly DV support group, and attended her church. By the time Rhonda exited the program, she had expanded her network, increased her knowledge on DV, obtained a full time job, secured housing, and went on to represent herself in court to obtain full custody of her son.

“I was so proud,” says Leenette who reported that Rhonda spent countless hours preparing for her custody case. Rhonda would come into the Hilo Child and Family Center with binders of paperwork, using the center as a safe space to prepare for court and apply for housing.

“Everyone knew her, she got along with all of us,” says Leenette, adding that the CFS staff even watched her son grow up. “When she first came in, she brought him with her in an infant carrier. We later watched him take his first steps. Now, he’s in preschool!”

Rhonda exited the CFS program in February 2016, and Rhonda and her son now have a house in the Puna area. Inspired by her time with CFS, Leenette says, Rhonda’s goal is to start a resource center.

Despite the hardship her clients initially go through, Leenette says it is women like Rhonda, who make it worth coming into work everyday because the role of CFS is so vital. “When they come in, they are in trauma, it’s good to help them overcome that and to see them be successful.” 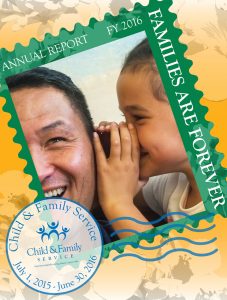